In November, at the EduWiki Conference 2013, academics and Wikimedians spent two days discussing a range of issues of common concern. David White of the University of Oxford’s Department for Continuing Education delivered a keynote exploring the ways in which students use Wikipedia, and I contributed a presentation of my own, describing a Wikipedia-based assignment I give to first-year students in Applied Human Geography and also looking at how academics can inform the widest public about their subject, and raise awareness of the reliable sources used in research.

For the past two decades, I’ve been part of a team building the site A Vision of Britain with funding from Jisc, the National Lottery and research bodies. I have also been involved in international discussions about ‘gazetteers’, during which I’ve come to regard Wikipedia as one of the world’s most widely used gazetteers. In the course of creating links between A Vision of Britain and Wikipedia it grew clear how many stub articles existed about villages and that gave me an idea that developed into an engaging, challenging assignment for my first-year students.

In one module, I want students to get substantial experience of using census data, and of proper referencing – to understand the numbers associated with a place and be able to interpret what those mean for the people who live there. The new assignment idea was to get students to deliver their work into Wikipedia. Each one was allocated a Wikipedia article about a village in northern England, and expected to look after it over a period of months, making gradual improvements by adding reliably sourced information.

The students do not visit their villages, which are also too obscure to be documented in Portsmouth’s libraries, so their research depends on online resources, including A Vision of Britain, Online Historical Population Reports, British History Online, Neighbourhood Statistics, Old Maps Online, and Geograph. These sites and other initiatives to digitise resources have transformed our ability to carry out small historical research projects that were practically impossible not long ago.

In preparation, students had two, one-hour sessions on basic Wikipedia editing, learning how to create headings and links, and about Wikipedia’s style requirements. They were also referred to Wikipedia’s guide to writing better articles and to the extensive guidelines drawn up by WikiProject UK Geography, a group of Wikipedians working to improve relevant articles.

And we were fortunate to have enthusiastic help. Andrew Gray, then the British Library’s Wikipedian In Residence, used a tool to create a list of short, incomplete articles about villages that had not been worked on for at least a year. Keith_D and other veteran Wikipedia editors who focus on articles related to northern England also gave help and encouragement. 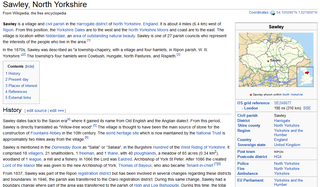 The Sawley, North Yorkshire articles was among those improved.

As an example of what the students achieved, the article on Sawley, North Yorkshire, which was formerly a bare list of key figures, is now a helpful narrative with 30 references. The article history shows this evolution in detail, with a student adding chunks of referenced text and Keith_D and other Wikipedians making tweaks and suggestions. The students’ work is not what would be done by professional historians working with archival sources, but I’m satisfied that the quality of referencing stands up against professional work.

The project was not without its difficulties. Some students initially found the prospect of writing ‘in public’ challenging, but now the articles have been improved most are proud to have their work on public view.

And there were practical problems. The useability of the Wikipedia interface was one, though this has got better over time. Students were also affected by restrictions that apply to ‘new accounts’ on Wikipedia – defined as those created fewer than ten days ago or with fewer than four edits. The restrictions are designed to discourage spammers, but they added a layer of difficulty to the first edits and meant that students could not configure their preferences.

A growing number of course leaders in other universities worldwide are setting Wikipedia writing assignments, typically for second- or third-year undergraduates who would otherwise be doing a dissertation. Giving first-year students the tasks of researching, synthesising and writing their own articles is quite unusual, and it has become possible because of the very systematic online sources now available.

The assignment will continue next year and in the future. It is a victim of its own success in that northern villages with very short Wikipedia articles are now hard to come by, so future attention will turn to other counties.

There are some things that we want to improve on. For example, a lot of student discussion about the assignment took place on Facebook where it could not be monitored. One goal is to structure the assessment so that students are encouraged to take part in more open discussion, including on Wikipedia itself, where there are talk pages for every article and for every user.

The project was co-ordinated from a page on Portsmouth’s Virtual Learning Environment (VLE). It was maximally convenient for students to have all course-related information in one place, but it meant that details of the project were not publicly accessible. That is something else that we will review.

As well as its educational merits, this assignment extended the knowledge that’s freely available to the public via Wikipedia and promoted the use of professionally-created geographical databases. The same could be done with many other subjects and their research resources.

Martin’s tips for educators who want to work with Wikipedia:

Thanks to the Jisc Communications team for help with copyediting this blog post.

2 thoughts on “Telling the stories of rural England with Wikipedia”

We use cookies on our website to give you the most relevant experience by remembering your preferences and repeat visits. By clicking “Accept”, you consent to the use of ALL the cookies.
Cookie settingsACCEPT
Manage consent

This website uses cookies to improve your experience while you navigate through the website. Out of these, the cookies that are categorized as necessary are stored on your browser as they are essential for the working of basic functionalities of the website. We also use third-party cookies that help us analyze and understand how you use this website. These cookies will be stored in your browser only with your consent. You also have the option to opt-out of these cookies. But opting out of some of these cookies may affect your browsing experience.
Necessary Always Enabled

Any cookies that may not be particularly necessary for the website to function and is used specifically to collect user personal data via analytics, ads, other embedded contents are termed as non-necessary cookies. It is mandatory to procure user consent prior to running these cookies on your website.